The Wall Street Journal featured “They Did That” on their podcast, “What’s News” on March 28th in an episode entitled, “Inflation Earns a Starring Role in the 2022 Midterm Elections”.

Click the image for a link to the audio. 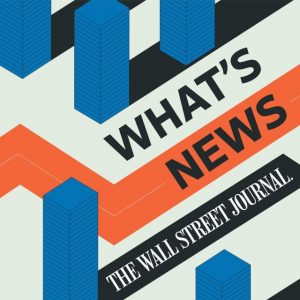 “Who will keep us safe in Virginia? Murder rates are at a 20-year high with no end in sight,” the narrator of the ad begins, identifying former Gov. McAuliffe as a “career politician.”

“Last time he was a failure. Under his watch, murder jumped 43 percent. His parole board picks turned criminals loose. Now, he’s cozying up to radical groups that want to defund the police,” the narrator adds. “Terry McAuliffe— he’s too dangerous for Virginia.”

The $1.75 million TV ad buy focusing on the Democrat’s “dismal” record on crime will begin airing in the Old Dominion State on Wednesday.

“Murder rates are spiraling in Democrat-run cities and states across America,” Doug Truax, Restoration PAC’s Founder and President, said in a statement.

“Terry McAuliffe has already demonstrated his failure at controlling those rates in Virginia — why would Virginians give him another chance?” he added.

With politics, sometimes it’s OK to lean back and relax.

Or to the side. Or even straight forward until you bump your head on the podium.

The ad shows two young aides through the night with a lifeless replica of the Democratic nominee for president.

They go get the candidate from his basement, blow-dry his hair, clean off his veneers and drive him to a campaign stop – where he promptly collapses on the podium as they let go of his shoulders.

There’s also a brief diplomatic meeting between the candidate and foreign officials.

“Hunter still owes us,” one of the diplomats says.

At the end, the two aides push their candidate into the back of an SUV.

“How long do we have to keep this up?” one asks.

Nick Ward, who created the ad with the “No to Joe PAC” and appears in it as a beanie-wearing aide, told Fox News Thursday that he wanted it to be funny without being offensive.

“I actually hope that Joe Biden sees this and laughs,” he said. “Sometimes things like humor allow you to look at aspects of yourself, or what you’re involved with, in a way that you weren’t willing to acknowledge before.”

FOR Republican ad-man Rick Reed, the inaugural press conference of the Swift Boat Veterans for Truth was less a professional opportunity than a chance to catch up with kin. His uncle, Adrian Lonsdale, had been one of John Kerry’s superior officers in Vietnam. The retired Coast Guard captain and more than a dozen other veterans were gathering in public for the first time to challenge various claims Kerry had made about his four-month tour of duty.

“I thought those guys had a great story that needed to get out,” says Reed. He returned to his office that afternoon, sent out a few e-mails describing what the Swifties had charged, and then waited for the barrage of media interest.

“We had a pretty good success, except it became apparent that we were going to get no attention from the major media,” says retired Admiral Roy Hoffmann, one of the ringleaders of Swift Boat Vets. “I think it was practically zero.”

Well, it wasn’t exactly zero. The media did show up—and promptly dismissed the vets as ax-grinding Republican operatives. A short New York Times article, for instance, was buried on page A22. It included references to “Nixonian dirty tricks” and Joe McCarthy.

That May 4 press conference was perhaps the most overlooked major news event of the campaign—and the media’s failure to give the Swifties their due led to an ad campaign that will go down in history for its stunning effectiveness. By Election Day, the Swift Boat Vets had spent more than $19 million on TV advertising, mostly in battleground states such as Ohio ($5.1 million) and Florida ($3.6 million). One post-election survey of actual voters found that 75 percent of them were familiar with the Swifties and their allegations about Kerry’s qualifications for the presidency. When voters were asked which of the ads financed by the so-called 527 groups made the biggest impact, the Vietnam vets were cited almost as much as all the other 527 groups combined.

The Swifties had hoped to tell their war stories on May 4, give a few interviews, and then return to their normal lives as the press and the voters sorted things out. But the failure—or, perhaps more accurately, the refusal—of the media to investigate their claims in the wake of the press conference troubled them. “We learned from some former POWs that when they were held captive in Vietnam, they developed a ‘tap code’ to communicate with each other without the guards’ knowing,” says John O’Neill, a Swift-boat commander and one of the group’s organizers. “We realized we needed our own tap code to talk to the public.”

By the first week of June, a few of the Swifties were meeting with GOP political hand Chris LaCivita, a combat veteran who bonded with O’Neill and the others. As a Marine fighting in Kuwait in 1991, LaCivita received a Purple Heart for taking shrapnel from an Iraqi T-72 tank. O’Neill e-mailed him a draft manuscript of what would become his bestselling book, Unfit for Command: Swift Boat Veterans Speak Out Against John Kerry.

“My first thought was that we had to run ads to force the issue,” says LaCivita. “The mainstream media can ignore a press conference, but they can’t ignore an ad.”

LaCivita jotted down an idea for a script and got in touch with Reed, a friend who had produced ads for Republican candidates. There was not much copy to write because most of the ads would simply rely on the veterans’ speaking directly to the camera. “Our main intention was to preserve the authenticity of these veterans,” says LaCivita. “We didn’t want our ads to look like something out of D.C. or Hollywood.” Rather than planning for one or two commercials, they mapped out an entire campaign that would run up to the election. Yet they weren’t sure how they would secure the financing. They hoped for a budget of perhaps $3 million.

Their first task was to assemble the veterans. On July 9, about 30 of them gathered at the Key Bridge Marriott in Arlington, Va. That evening, LaCivita went through their stories and tried to figure out who had the closest connections to Kerry. Everybody signed affidavits. The next day, a Saturday, the entire group got on a bus and headed for Atlantic Studios in downtown Washington, where old soldiers and sailors sat in front of green screens for 13 hours as the cameras recorded their stories.

Over the next few days, Reed turned this mountain of footage into a pair of 60-second commercials featuring veterans contradicting Kerry’s claims of combat bravado and criticizing his antiwar protesting. The green screens were replaced with black-and-white photos of Swift boats and Kerry. The second ad included Kerry’s own voice from his 1971 Senate testimony damning American soldiers for war crimes. Both were set to original music composed by Todd Hahn; the aural effect was at once solemn and chilling.

Simultaneously, the Swifties started raising money. They managed to cobble together about $500,000 for advertising—a pittance compared with the tens of millions that George Soros, MoveOn.org, and others were spending to aid the Democrats. When the first ad aired in early August, it was limited to a few small markets in Ohio, West Virginia, and Wisconsin. The Swifties couldn’t afford to pay for stations in Cleveland or Milwaukee, so they settled for the likes of Youngstown and Wausau instead.

Their timing couldn’t have been better. The previous week had seen the release of O’Neill’s book as well as Kerry’s convention speech with its “reporting for duty” line and heavy emphasis on service in Vietnam. “We had discussed airing the ad during the convention, but we just didn’t have the money for it,” says Greg Mueller, a conservative publicist who promoted O’Neill’s book and arranged media appearances for other veterans. “It was really helpful to have Kerry raise the issue of Vietnam on his own and so prominently.”

Even though the first ad appeared in just a handful of venues, it quickly became the subject of intense national debate. LaCivita had been correct: The media could ignore the Swifties when they gathered at the National Press Club, but they had a much more difficult time when the veterans made their accusations in commercials airing in battleground states. As Internet sites, talk radio, and cable-TV shows turned their gaze toward the Swifties, a news story was born.

Kerry was criticized for not responding quickly enough. There is some truth in this, because Kerry’s team really did think that engaging the Swifties would breathe extra life into their efforts. Without talking points, however, the candidate’s surrogates grew frustrated. Many of them wound up defending Kerry’s statements from 30 years earlier—i.e., they affirmed that war crimes were rampant and said Kerry was right to speak out against them. Yet this only succeeded in shining more light on the basic problem: Kerry didn’t respond to the Swifties because there was no meaningful response he could make short of offering a full apology for his 1971 testimony. This was something he wasn’t willing to do. So he clung to the awkward hope that voters would revere his own service in a cause that he had slandered.

More ads followed. An Internet-only ad featured Kerry crewmate Steven Gardner challenging the senator’s claim of having gone on a secret mission to Cambodia. Next came a pair of ads about Kerry throwing away his war medals, and his various explanations of that notorious episode. Another commercial described Kerry meeting with North Vietnamese leaders in Paris and unfavorably compared him to Jane Fonda, who at least has expressed regret for her war protests. Yet another, filmed partly in Reed’s living room, had the wives of former POWs criticizing Kerry’s antiwar statements.

These additional efforts were made possible because the Swifties raised huge amounts of money—far more than they had thought imaginable. During the first couple of weeks of August, they were collecting $200,000 per day from Internet contributions alone. In all, they generated more than $25 million from 150,000 donors. Most of it went for TV advertising, and not just in the cheap markets.

The veterans assembled in Washington once more on October 9. This time, there were many more of them—about 90. As they had planned all along, LaCivita and Reed wanted their final ads to show that the Swifties weren’t just a few disgruntled Republicans, but a broad-based movement of former servicemen who had not forgotten a vicious insult. As a dolly-driven camera moved from face to face, it quickly became apparent to any viewer that Kerry wouldn’t win a majority of the votes even among his “band of brothers.” The men who could claim to know him best—or at least to know best his qualifications for commander-inchief—were saying that he didn’t deserve the presidency.

In one of those final commercials, the camera paused for a moment on Bud Day. The white-haired former POW and Medal of Honor winner asked a simple question: “How can you expect our sons and daughters to follow you when you condemned their fathers and grandfathers?

It turns out that Kerry couldn’t. The tap code had gotten through.